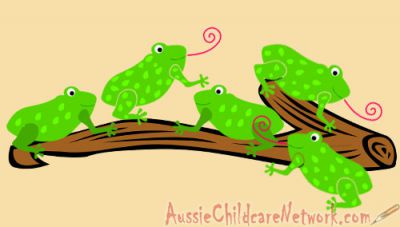 Eating the most delicious grubs

One jumped into the pool

Where it was nice and cool

Then there were four green speckled frogs.

(The verse is then repeated, but with one fewer frog each time.)

Eating some some scum (Yum, yum!)

Line #1: By show of fingers hold up the number of frogs sitting on the log.
Line #2: Draw in your hands close to your chest and curl your fingers downward, facing the floor as though you are a frog perched atop a log.
Line #3: Mimic eating while you sing 'Eating some scum', then rub your belly delightfully while singing 'yum, yum!'.
Line #4: Hold one finger up to represent the frog who fell off the log.
Line #5: Pretend to fall over.
Line #6: By a show of fingers, hold up the number of frogs still remaining on the log while singing "Now there's only four speckled frogs". Upon singing "(glub, glub)", repeat the same movement as in the second line except look upward as though you were a frog underneath water. 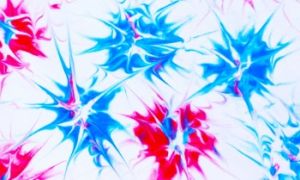 Let's celebrate with these spectacular colourful fireworks! Easy to make and it's messy and fun! 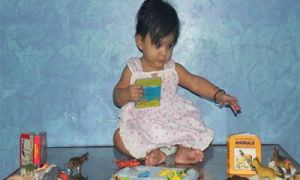 Encourage baby to respond to familiar animals through this game. 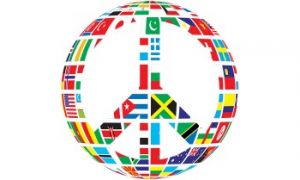 Peace Is The Way

There is a way that we can live and peace is the wayP – E...