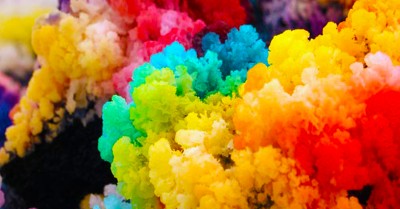 Over the next couple of days, the crystals will form. It's important to make sure that during this process that the rainbow garden remains undisturbed and untouched. For continually growing the garden, add small amounts of water, bluo and salt.

The reason people use liquid bluing (Bluo) in crystal experiments is to make the crystal bloom into broccoli-like shapes like trees in a real garden, rather than chunks or plates. Bluing solution consists mainly of ferric ferrocyanide (commonly known as Prussian blue) and water. The Prussian blue doesn’t dissolve in the water, so it remains suspended in the liquid. This is a colloidal suspension.

At the start of a crystal garden experiment, you mix liquid bluing with salt, water and ammonia to create a watery blue sludge. Pour it over small pieces of porous material, like sponges and clay pot pieces, in a plastic container. Leave the container overnight, and by the next day, crystals should form. You keep the "garden" growing by adding more salt and more of the sludge mixture. As the water and ammonia evaporates away, the collodial particles provide seeds for the salt to produce crystals, creating the broccoli shapes.

Created On February 14, 2021
Tweet
Published in Games and Activities
Tagged under

More in this category: « Rainbow Fireworks In A Jar   ||   Growing Hair Planters »