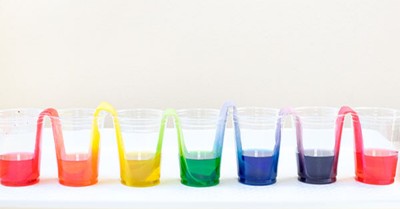 Children will be excited to see how the colours transform overtime as the water moves from one glass to another.

The longer you wait to check on the glasses will result in more of the water moving over to the other glass. The water will stop moving over until the cups are both filled with the same amount of water.

Created On February 9, 2021
Tweet
Published in Games and Activities
More in this category: « Rainbow Paper   ||   Rainbow Fireworks In A Jar »