Ocean Waves In A Bottle 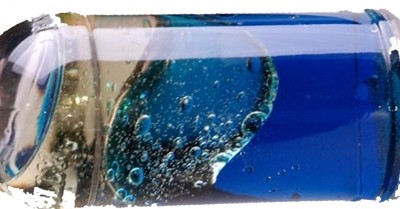 Move the bottle to create ocean waves, just like out in the deep blue sea.

Anything that disturbs the surface of the ocean will cause waves to form. Deep-sea earthquakes can also disturb the ocean surface, sending waves toward the coast. Waves do not move horizontally; they only move up and down (a wave does not represent a flow of water). You can see this by watching a floating buoy or a small boat go up and down with a wave; it does not, however, move horizontally with the wave. Rather, the wind transfers some of its energy to the water through friction between the air and water molecules. Stronger winds (like storm surges) cause larger waves. As the wave approaches the coastline, it will encounter the rising seafloor and begin to show its true size.