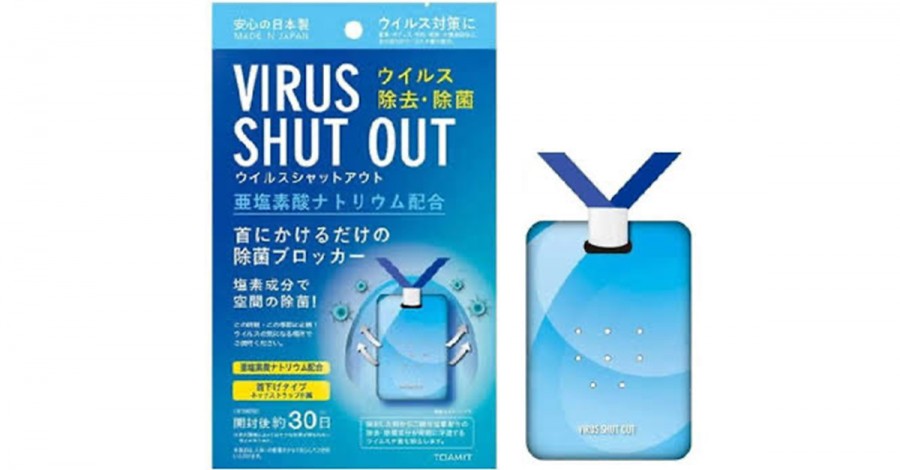 One child wearing this device was seen waving it around in the playground to ward off fellow children and teachers who attempted to stand too close to him. The device was confiscated, and the child's mother was warned of the potential danger to other children.

The Toamit 'Virus Shut Out' is manufactured in Japan. It is a card attached to a lanyard that is worn around the neck. The packaging also claims it also protects the wearer from various epidemic viruses – reducing the chance of being infected or infecting others".

Virus Shut Out's' main ingredient is chlorine dioxide, a highly corrosive substance that can cause inflammation to the airways and irritate the eyes.

Australian National University Professor Peter Collignon told Nine.com.au."It's toxic and it's corrosive so it has all the harm and no benefit. There's a lot of products out there that look like they have some merit because there's an element of truth in what they say – chlorine, for example, can kill viruses.
But chlorine is also very toxic, and they also don't consider how the virus spreads. COVID-19 spreads predominantly through droplets – if you are near someone and they cough or sneeze and the droplets hit your face, eyes, nose or mouth, or if you touch something then touch your face, a card worn below your neck will not protect you. It will do nothing to stop the virus getting into your body."

NSW Health says it is investigating the 'Virus Shut Out' device, the Therapeutic Goods Administration has not taken specific regulatory action to ban it in Australia.

While the device is not yet banned in Australia, it is illegal in the US and several countries around Asia.

The device has gained popularity since the COVID-19 pandemic swept the world, however, experts say there is no evidence it works.